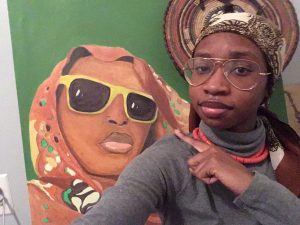 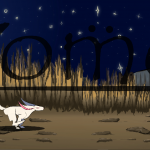 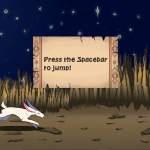 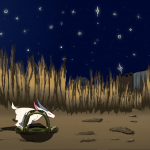 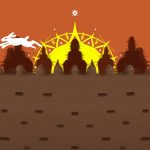 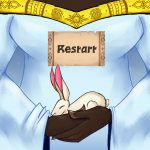 Rabia Danyaro is an Art major from Rutgers–Camden with a concentration in Intermedia and Electronic arts. Prior to Rutgers, Rabia received an Associate’s degree in Computer Graphic Arts with a concentration in Game and Interactive Design from Rowan College of South Jersey. At Rowan she was awarded with the President’s Award for Excellence in her major. Raised in Nigeria, Rabia has a strong appreciation for art and culture of her homeland. As a practicing artist, she now aims to reference her culture in the art she creates while exploring other cultures and aesthetics for inspiration. Outside of work, she enjoys listening to music while playing adventure games, doodling and eating chocolate or sushi.

Zomo is a video game created at Rutgers University, by Rabia Danyaro. The game was created in Game Maker Studio and is played on a PC. During the game, a single player travels a dangerous path through fields with a white rabbit. Periodically, bear traps appear on the path and the user must hit the spacebar so that the rabbit can jump over the trap. The background scene of the game is a night sky with stars and a moon. Tall grasses pass by in the night as the rabbit runs. Over the course of the game the background changes, revealing abstract rabbit themed illustrations. After the rabbit is caught by the traps three times, a screen appears illustrating a sick rabbit attacking the white rabbit to signify the player’s loss. However, if the user/rabbit survives for two minutes, the game finishes and the survivor is rewarded with an image of a bright, starry, nighttime sky.

Zomo can be seen as a simple game about being a rabbit running through the field endlessly jumping over traps. The player may also see that the white rabbit is however not only avoiding traps set by humans, but its diseased and violent brethren as well. The rabbit seems to have so many enemies and because the game doesn’t end unless the player loses, it’s implied that the rabbit must run forever until it inevitably dies.