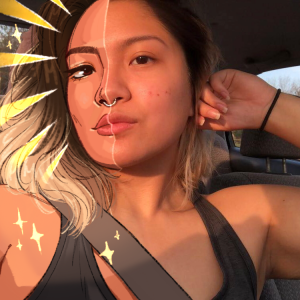 Animation in many different forms has always been a huge source of fascination and inspiration for me. I have enjoyed watching cartoons, anime, and animated films for as long as I can remember, and I’ve always wanted to learn how to animate. I always found myself imagining that my drawings were animated and I can vividly remember wishing that I knew how to bring my art to life. Before coming to Rutgers, my only experience with animation had been very short, simple animations I made in an application for the Nintendo DSi called Flipnote Hatena. Throughout high school, I unfortunately wasn’t given many opportunities to develop my art or my animation in an academic setting, so I was over the moon when I found out that Rutgers — Camden had an animation program. While much of the focus over the last four years has been on 3D animation rather than 2D, I feel that I have learned so much.

I love exploring themes of female empowerment and strength in art, and this is evident in my 2020 Thesis Film. The short film features Stheno, a young gorgon woman — the same type of creature found in Greek Mythology. Gorgons, such as the infamous Medusa, have the ability to turn anyone who looks into their eyes to stone. In my short film, Stheno is continuously pursued by a minotaur who is very obviously interested in her. Being a gorgon, Stheno finally reaches her breaking point and turns the minotaur to stone. One thing I wanted to focus on when initially writing the story for the film was catcalling. Rather than silently enduring it, I’d like women to feel safe in standing up for themselves and putting their foot down against men who can’t take a hint. To show this, I decided to have my character turn her catcaller into stone as a way to show that she is strong and will not tolerate a catcaller.