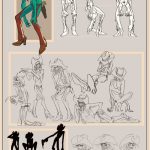 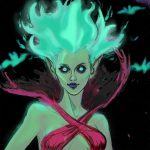 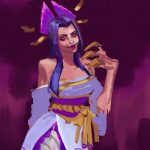 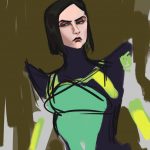 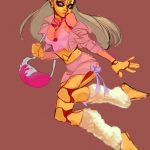 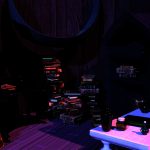 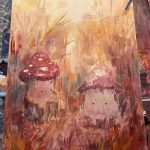 Taylor Sullivan is a 2021 graduate student of Rutgers, majoring in Digital art. While she enjoys watercolor,  she has been working with 2D art for almost 10 years, and has a few years of 3D modeling knowledge and still building upon it.  Her work aims to explore unusual looking characters as well as characters that do not fit the generally “ideal” beauty standards. She finds interest in drawing the female form and adding a level of horror to it as well as oddity.  Females are generally seen as being more docile in their demeanor as well as more serious, she looks to break these preconceived notions by adding ferocity and humor to her female characters. She is currently doing work on an indie game in her part time. She worked at the Writing and Design lab for a few semesters helping other students with their various projects, be it school assigned or personal.

Ever since I could remember I have been interested in the world of fantasy and imagination.  I have hundreds of drawings from my childhood of dragons and other monsters, stashed away in my closet.  My work is about fulfilling my own imagination by crafting my own worlds and characters, as well as exploring the female form through an idea of a character.  My work is important to me because it allows me to fully convey my feelings and imagination.  I think that art is an important tool that allows us to connect to others even if we do not personally know the viewer, we can achieve the same thoughts and emotions.

My short film is about a loner who stumbles upon another world and does not find acceptance in it right away due to how she appears, in which she looks extremely monstrous as she is undead.  I know that I generally do not see female protagonists that are ugly or that varied in their looks, so I gave my main character a very unusual appearance.  Throughout the film the main character is ignored or gawked at until an opportunity presents itself to show others that she is a kind person.  The rest of the cast in my short film are all cute anthropomorphic animals which I thought would create an interesting contrast between the characters.